Skip to main content
Catchup on all the latest action from ${round}!
Previous
Next
Loading…
Watch every match live and on-demand...

In an era where AFL players can be prevented from engaging in potentially dangerous activities, and where their preparation and recovery are meticulously planned, the exploits of Cyril Gove would have club officials shaking their heads.

Gove might well have completed an unprecedented sporting triathlon in 1915, performing as a jockey, a League footballer for Essendon and as a boxer – all within just hours on the same day!

A portrait of Cyril Gove in his Essendon strip. (Photo: Gove family)

There's conjecture over whether Gove fulfilled the final, boxing leg of that trifecta, but AFL.com.au has uncovered new evidence that strengthens the argument that he did step into the ring.

In any case, the afternoon of Saturday, May 29, 1915 was particularly hectic for the super-fit 25-year-old.

A "first-flight" amateur jockey, Gove had always juggled horse racing and footy. The previous season he'd missed the Dons' opening game while creating "a unique record for a league footballer" by riding five winners at a country race meeting. 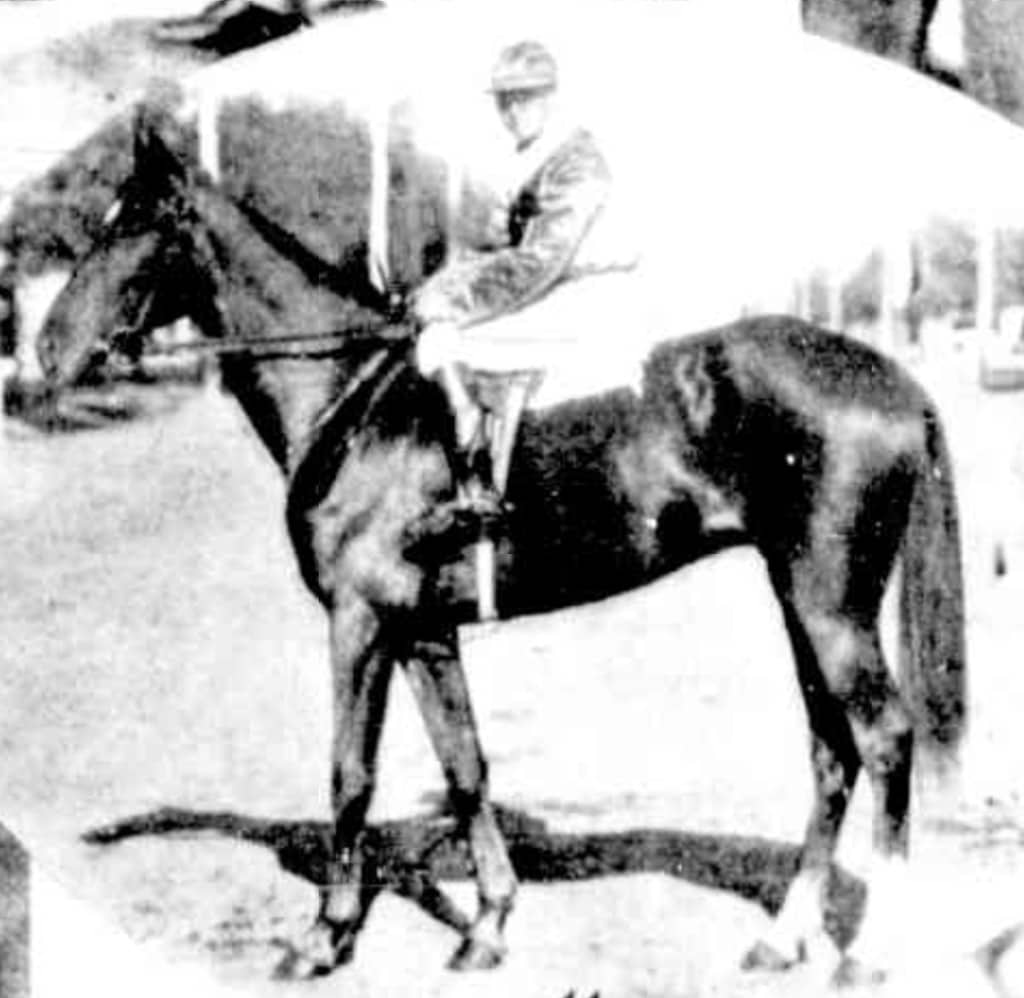 Gove was an accomplished amateur jockey. (Photo: The Australasian)

What he did next put that effort in the shade.

Gove had reportedly been "in a quandary" about how to fulfil his sporting engagements but there was no way he was going to be a scratching.

In a large field of 26 in the 1400m Springbank Corinthian Handicap at Moonee Valley, Gove steered 20-1 longshot Menthe to a close-run third placing – and prizemoney of £5.

He had to move even faster post-race. After weighing in and hurriedly changing out of his silks after the 2pm race, Gove then either jumped in a cab or rode a motorbike (there were conflicting accounts at the time) and high-tailed it to East Melbourne Cricket Ground, Essendon's then home ground, where he stripped into his footy gear just in time to take the field against South Melbourne at 3pm.

It was just his 24th League game but Gove was already a "first-rate" performer as a wingman or second rover. A wiry little man, he was the same height as the AFL's current shortest player, Western Bulldogs playmaker Caleb Daniel – 168cms – but about 17kg lighter at 55kg.

Originally from Ascot Vale in the Essendon district, Gove had impressed with amateur team Collegians before making his League debut at 23 in 1913. The next year he represented Victoria at the national carnival in Sydney. 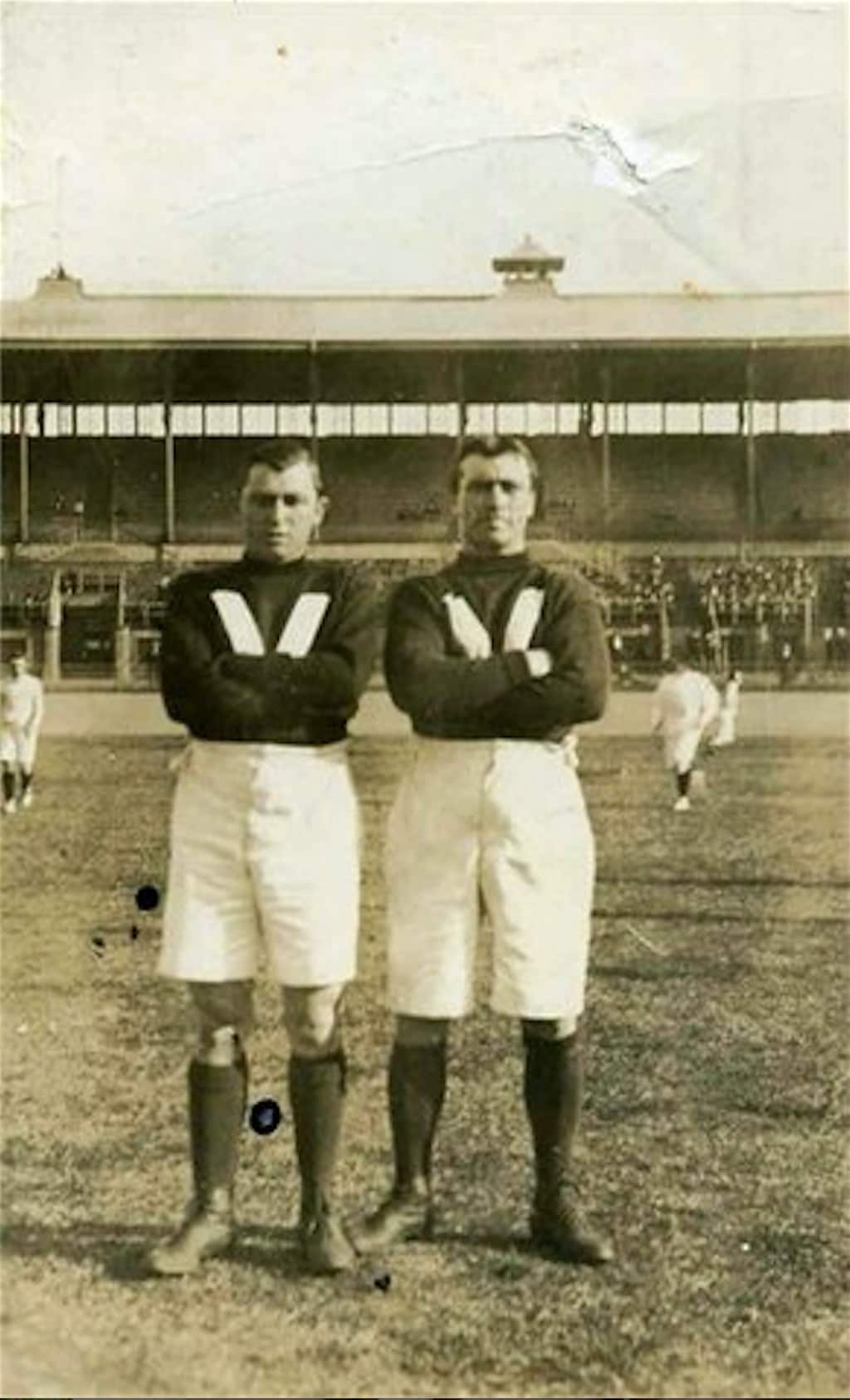 He initially didn't enlist for service in World War I as he worked for stock and station agents in what was regarded as an essential service, which enabled him to continue his sporting career.

Despite his unusually vigorous preparation for the clash with South Melbourne, Gove produced "his usual, breezy game on the wing". His coach, the masterful Jack Worrall (we wonder what he made of it all), gave him the job on South star Mark Tandy – an eventual inductee into the Australian Football Hall of Fame – and he rose to the occasion, with The Football Record noting that the "cute little Dons' wingster … had the call over Tandy".

The Age went further, declaring Gove had been "one of the best men on the ground" until he suffered a hand or finger injury just before half-time. It's a wonder he didn't also suffer from cramp, dehydration or exhaustion.

Gove's injury and lack of impact thereafter was critical to the result, his team going down to the eventual grand finallist by just nine points.

In some retellings, Gove's sporting extravaganza didn't end there. Some have claimed the pocket dynamo then traded his footy togs for trunks and fought at West Melbourne Stadium (later known as Festival Hall). There was even a suggestion he went the distance in a bout for a Victorian amateur title and was narrowly beaten on points.

Unfortunately, we couldn't lay a glove on any evidence to confirm this boxing story in newspapers of the time. In fact, that day's edition of The Age previewed three fights at the stadium and Gove's name didn't appear on the card. Post-fight reports are also Gove-less.

Furthermore, The Age, The Argus and The Football Record each hailed his dual jockey-footballer effort but none mentioned boxing. If Gove had performed this Herculean triple-feat, surely such a detail wouldn't have been overlooked.

This doesn't necessarily deliver the knockout blow to the sweet-science theory. Could Gove have fought under an assumed name? Was an impromptu, unofficial bout arranged on the night? Could he have fought at another venue?

In any case, would Gove have even been capable of boxing given his finger/hand injury?

As far as we can tell, no reporter ever got the story straight from the horse's mouth. The modest Gove, who died almost 50 years ago, never even spoke about it with his own sons. 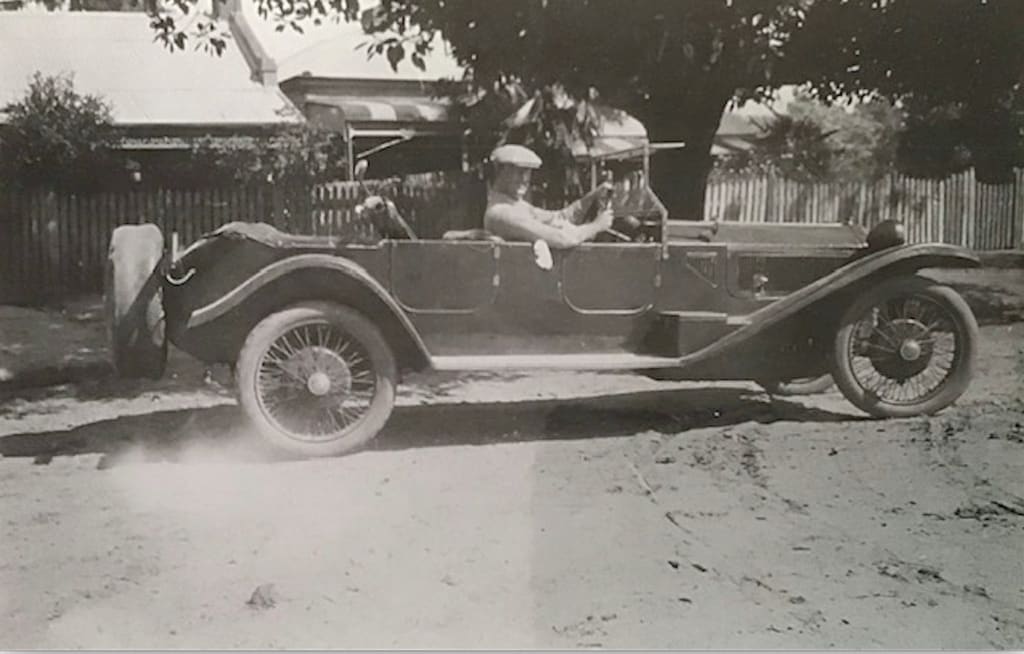 His preferred mode of travel was by horse, but Gove also had a passion for classic cars. (Photo: Gove family)

Gove was well into his 40s when his sons David and Philip were born. Both are now in their 80s and living in New South Wales.

"Dad never talked about any of his sporting achievements. He was very shy about those things. He didn't blow his own trumpet at all. We had to find out about it all from the press and other people," Philip Gove told AFL.com.au.

Intriguingly, one of Gove's friends was more forthcoming, providing information that supports the boxing contention.

"I was only a young boy during the war (World War II) but I distinctly remember something I was told by a friend of one of my uncles, who was also a friend of Dad's," David Gove said.

"He told me: 'Do you realise your father is unique? His record will never be beaten.' Then he mentioned the three events in the one day.

"He was a similar age to Dad, and the way he was talking it's possible he was there (at the boxing)." 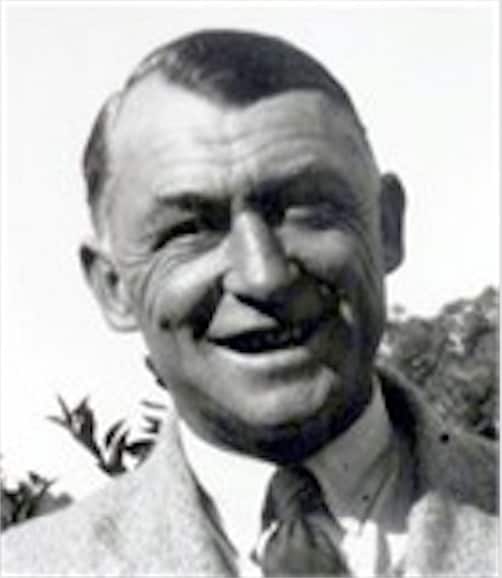 Given the closeness of the source to the subject, Gove's sons accepted their father's three-sport spectacular as fact.

There was also a suggestion that Gove had raced and boxed in Essendon colours. It's a romantic notion but not one we can prove either way.

There are other claims, though, that we can dismiss out of hand.

The Gove story took on such a life of its own that it has left some great journalists in its wake.

In 1957 The Herald's renowned racing scribe Bert Wolfe, aka 'Cardigan', wrote that Gove had actually competed in four sporting events on the day, triumphing in each of them, including the outrageous claim that he'd warmed up by winning a marathon in the morning.

If that were true there would be no debate, and Gove's heroics would have been enshrined in film and in song long ago. Indeed, it seems 'Cardigan' had the wool pulled over him.

"As a jockey, Dad was always keeping his weight down, but running marathons was never part of it," Philip Gove said.

After that fateful day in 1915, our pint-sized hero played just two more games for Essendon that season before suffering a severe thigh injury.

It gave him more time to work with his father Julius and three brothers in the family business, the Australian and Eastern Company, which exported Aussie thoroughbreds to India for the army, police and polo. Gove (front right) with his parents Catherine and Julius and other family members. (Photo: Essendon FC)

While in India during World War I, Gove was seconded to the Indian Army. He's not believed to have seen frontline service on medical grounds, possibly owing to his leg injury.

When he returned home, Gove made two final appearances for Essendon in 1918, finishing with 28 games before retiring at 28.

He then captain-coached Mathoura (in southern New South Wales), leading the Timbercutters to their first two premierships in 1920-21, and coached nearby Deniliquin to grand final losses against Mathoura in 1936-37.

The sporting all-rounder was also a talented cricketer (he'd been invited to play district cricket in Melbourne but the competition went into recess during the war), was handy at tennis and polo, and was a motoring enthusiast. Is there a sport this man couldn't play? 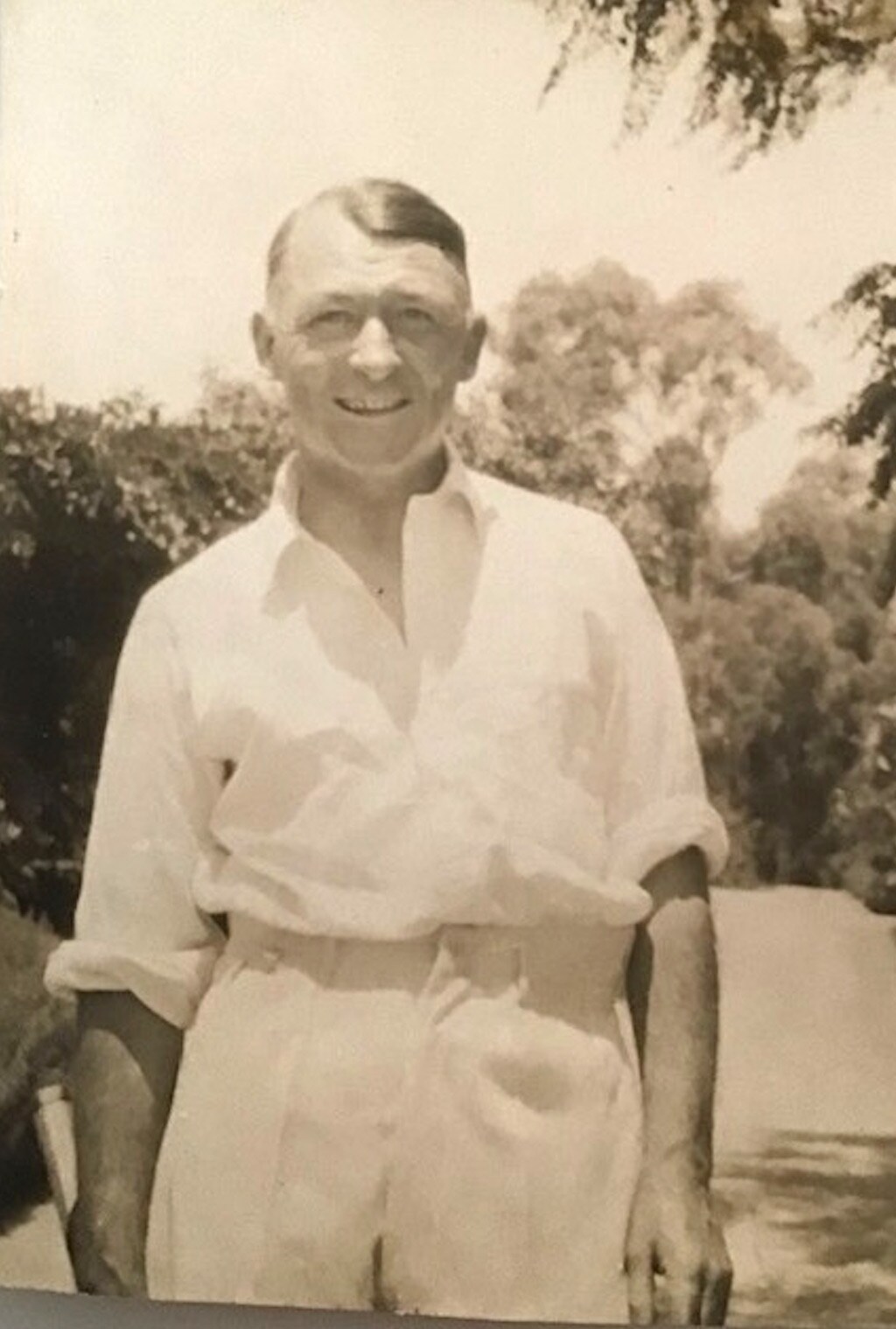 A gifted all-round sportsman, Gove was a handy cricketer who would have played district cricket in Melbourne if not for the outbreak of World War I. (Photo: Essendon FC)

Horses remained a way of life, with Gove becoming president of the Southern Riverina Picnic Turf Club and riding in amateur races into his fifties.

His brothers Bob and Theo were part owners of the Australian Bloodstock Agency in Melbourne, and Bob also served as chairman of Melbourne Racing Club.

Bob was a RAAF squadron leader in WWI, and Gove Peninsula in the Northern Territory was named after his son Bill, an RAAF navigator who was just 21 when he was killed in a mid-air collision during World War II.

Another brother, Charlie Gove, had played polo with the Prince of Wales (later King Edward III) in India in 1922 and died soon after from a burst appendix, leaving behind a wife and child. 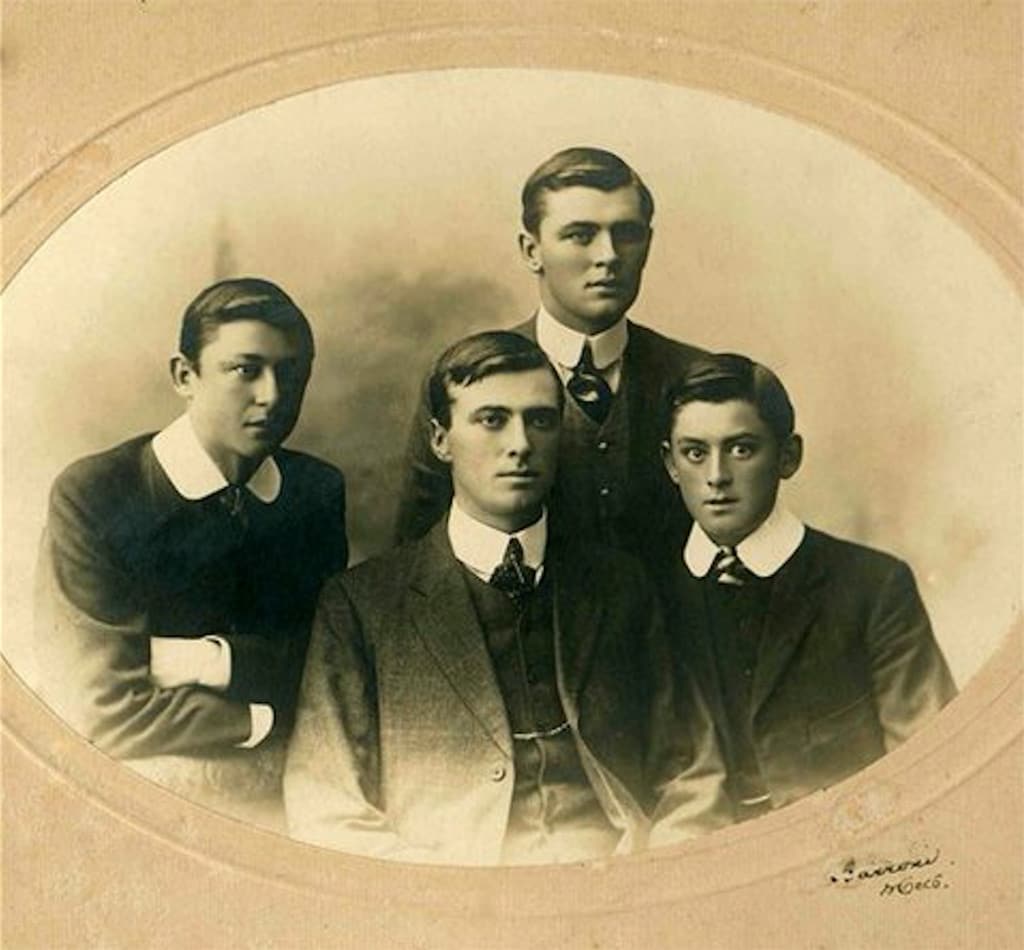 Cyril Gove managed the family's 11,000-acre sheep and cattle farm near Deniliquin, NSW, but regularly travelled the 300km down to watch Essendon play. He never missed a League Grand Final or a Melbourne Cup until bowel cancer slowed him down in his 80s.

"I got very annoyed with Dad one day when he took off in the middle of shearing. He was just so keen to go to an Essendon game," Philip Gove said.

Philip was a talented footballer for Deniliquin and his father passed on all his tricks to his son, such as: "Don't try to pick up the ball when you're running flat out – tap it in front of you so it bounces up."

Gove's sons regarded him as tough but fair, and they remain proud of his achievements.

"There was nothing of him physically but he was an extraordinary man who had great ability at many things," Philip Gove said.

David Gove added: "His total envelopment in life was sport, which absolutely loved, football being No.1. In many respects sport should have been his career path rather than being on the land."

Another highly anticipated edition of the James Hird Academy newsletter has been released.